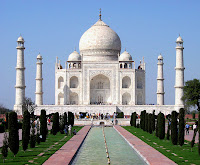 Mughal Emperor Shah Jahan built Taj Mahal in honor of his late wife Mumtaz Mahal. It is a fine specimen of Mughal Architecture, (which is an amalgam of Islamic, Indian and Persian architectures).
Taj Mahal was built at a time of great power and prosperity of the Mughal Empire. There was no expense spared in the construction, the best of manpower and materials were used. Construction started in 1632 and ended in 1653, though the main mausoleum was finished in 1648.
A board of architects worked on the project, with Shah Jahan himself supervising. Principal architect was Ustad Ahmed Lahori, with Abdul Karim Mamur Khan and Makram Khan on the board to assist him. 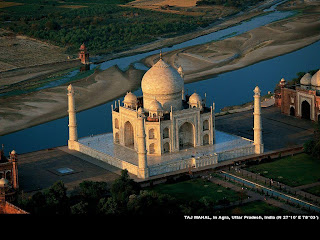 Tomb has the central focus and sits in the middle of the complex on a square plinth.
Building is constructed of white marble, with a dome and finial on top. The big doorway is arch shaped. The original finial was of gold, which was replaced in 19th century by gilded bronze copy. 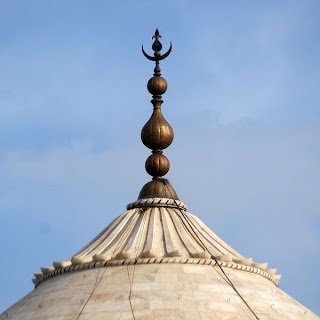 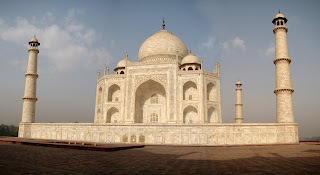 The four minarets are 140 ft. tall and are constructed a little away from the plinth. Reason is to protect the tomb from the falling debris from a falling minaret. Each minaret is divided in 3 equal sections. Each minaret has 2 balconies and a finial balcony on top. 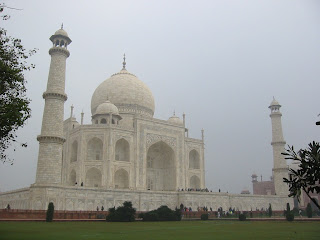 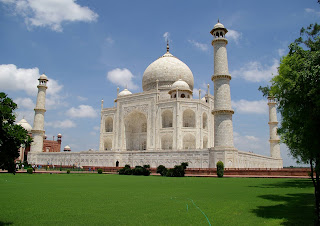 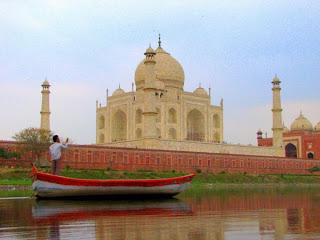 The whole complex is sided by a sandstone wall with additional buildings, including tombs of some other Royal family members and of the most trusted servant of Mumtaz Mahal. 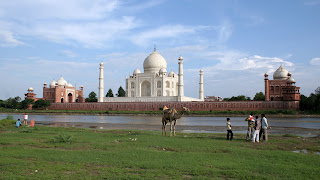 There is a main gateway at the front, it is built with marble and red stone, and decorated the same way as the main building. At the end of the complex, there are two identical red stone buildings opposite each other.  The western structure is a mosque, and the opposite and identical building (called; answer) was built for architectural balance. The only difference  in the two buildings is that of the floor and a lack of a “Mihrab” in the mirror building.
Exterior decoration is done with inlays, stucco, paint and carving. Mostly abstract forms, calligraphy and vegetative motifs are used in the décor. Most of the calligraphy is done by inlaid jasper and black marble. 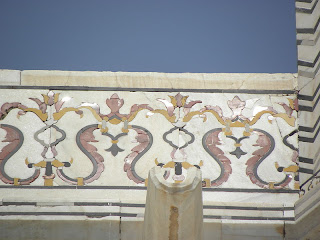 Will do 2nd part with the interior and other details.
Credits: Google, google India, wikipedia etc.

Posted by Paisley Curtain at 5:18 PM